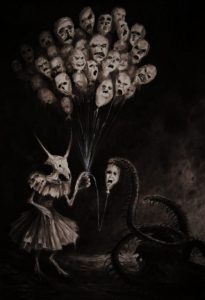 The latest decoy set up by the indestructible god of illusions is Posterity. Man has been invited to live for various motives. Once it was for the glory of God; Comte proposed as a motive the glory of man; now we are invited to live for the glory of Posterity. Nietzsche called Posterity the Overman; Socialists call it “the rising generation.” No one has thought of the glory of living for the sake of living, of eating, fighting, reproducing merely because they give pleasure. Always there are devil-gods that call for sacrifices; always there is the bogey-word that demands obeisance and tribute of all our actions. Nothing must exist for itself. Each thing must exist for the sake of some other thing. The perfume in a rose is legitimate only if there is a human nostril somewhere to be intoxicated; and the perfume of our acts and thoughts is a “moral” or “right” perfume only if it gives pleasure to the nostrils of God, Church, Common Good, or Posterity.

Man has not yet become a good animal. He suffers from ideals, as he once suffered from superstitions. An ideal is a superstition in court clothes. It makes very little difference whether you believe that an east-wind blowing down the chimney on a moonlight night will ring you good luck or that an act that gives you pleasure in the doing is “right” if it benefits Posterity and wrong if it doesn’t.

The East worships its ancestors; the West worships Posterity. The East lies prone on its belly offering its tributes to ghosts; the West bows its head in adoration to the ghosts not yet born. When an Oriental worships the soul of a bit of wood, we call him superstitious; when the Westerner worships certain letters of his alphabet which spell “God” or “Church” or “Morality” or “Posterity,” we call it the Ideal. And a smile steals over the furrowed brow of wisdom, and Momus reels in glee. Ancestor-worship is the old superstition; posterity-worship the new superstition. The “gods of our fathers” are become the gods of our children. The old bottles are filled with the new wine, but the old labels have never been taken off. We still march under mottoes and tramp to Ultima Thule to the raging tom-toms beaten by priests and idealists. Still we signal a host of imaginary beings with the gaudily-colored pocket-handkerchiefs of our latest trumpery abstraction.

All these words that man bows before, one after another, in his flight across the face of Time, are born of the idea of Responsibility—that somewhere there is Something that is taking cognizance of all his acts and will bring him to account for them. Sometimes it is the bearded, concrete Jehovah of the Jews; now it happens to be a beardless, visageless, vaguely-shadowed Posterity. The idea of responsibility is as universal as all other illusions; the universality of an idea or instinct merely proves—its universality. From the feeling of responsibility sprung the most immoral and strength-destroying doctrine that we know of—the doctrine of the Vicarious Atonement.

Responsibility to God was the first great necessary lie; for, if the race is to be preserved (no one has ever found out a rational reason why it should be), lies are more necessary to its growth and sustenance than truths. Responsibility to God—or gods—was the first ideal, the birth-boards that clamped and twisted the brain and soul of healthy self-centred beings and changed their centres of gravity from the enkernelled Self to an all-seeing, all-recording Non-entity that had a name but no local habitation. Man is born in his own incalculable anterior images, but he came to believe, in his all-ignorance, that he had been created in the image of another, a giant jail-warden who allowed him to rove the earth at his pleasure under a heavy bail-bond to keep the peace. The idea of an eternal responsibility to this abstraction germinated the first seeds of man’s moral weakness, paralyzed his activities, sickened him with scrupulosities, and filled him with the consciousness that healthy activity was sin. War began within him, a war between his superb irresponsible instincts and the idea of a vicarious responsibility, and out of that shambles issued the whining Christian, the lord of tatters called the idealist, and that mincing prig, Conscience.

The idea of responsibility to God began to wane with the dawning suspicion that man was not a celestial, but a sociological animal. Conceiving himself to be this new thing, he here invented a new kind of responsibility called “social responsibility.” The old mask was being repainted. The phrase “social well-being” was hoisted into the Ark of the Covenant of Lies. Man loved his neighbor for the responsibilities he could shoulder on him; the corner ballot-box was the Kabala; the community had power to bless or curse the individual. God had become a town-hall orator; the Recording Angel was become a court-reporter. The era of the State-Lie had begun.

The transition is easy from the cant about living for the sake of “doing good in the community” and “benefiting the whole” to the ideal of living for the sake of posterity. The old obscure doctrine of blood-sacrifices reappears in this new posterity superstition, slightly attenuated and shorn of its immediate and more obvious savage characteristics; but the old trail of responsibility and life-guilt is there.

It is the fetich, the Moloch, the Golden Calf of our civilization. We who are living, palpitating in the flesh and blood present, have no rights; the ego is not sufficient unto itself; we are only straws to show which way the sociological and evolutionary winds are blowing; we are only the bricks and mortar that shall go to build the marvellous, fantastic, phantasmal edifice to house that coming Holy Family—Posterity. Our deeds have no value unless they feed the bulging belly of incalculable non-existent to-morrows. We are only as scraps of bone and meat tossed to that fugitive glutton, the Future, by pasty-souled Idealists and the spineless altruists who poison life with their doctrines of responsibility and hoax the feminine with their metaphysical Cardiff Giants.

We are to be systematized, badged, classed, grooved, wired, stuffed; our instincts, our very marrow, are to be inoculated by the virus of Altruism and our faces beatified with the fore-running rays of the great Posterity Light. How we are to glow with the shine of “right living”—all because the altruistic quacks with their obsession of Succubae and Incubae have dreamed a new dream which they call Posterity!

Weak, impotent, helpless before the immovable present, man salves his sore spot with hopes for the future; not being able to regulate his life to-day, he promises himself a virtuous, vicarious to-morrow: not daring to set up his Ego as God and its endless pleasure as sufficient motive for all his acts, he sets up an Alter Ego and calls it Posterity, as he once called it God, then the State or the Community. With ecstatic eye and lolling anticipatory tongue he awaits for his happiness in Posterity—something no one has ever seen, something no one can define, something that could not possibly exist.