Because it all starts in school, start by setting fire to your own school today (Hurry, there won’t be enough for everyone) 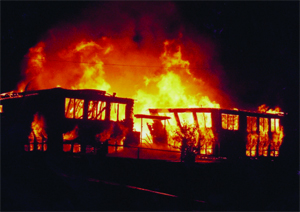 This world is shit. It’s not the first nor the last time that this will be said. Down with the state, work, citizenship, the spectacle, the stupefication of mass, the surveillance of spaces and thoughts, the standardization of everything, behaviors, relations, the lock-ups, the generalization of the means of control, of surveillance, of repression (etc, etc…) If you’re there, that’s what exists, among so many other state horrors, SCHOOL, national education, the institution of being a student. The school, along with the family, is the cement of our best of worlds.

School, a fundamental requirement.. School, it’s compulsory, in fact. Here we are, almost all of us have been through it. For more or less long times and in different establishments, but here we are, nearly all of us have been through it. Ghetto schools, elite schools. They’re wonderful these basic facts of school. The guardian state dispensing freely, for all and in equitable fashion, wise and all knowing. The elementary knowledge to all and each, the basis for knowing, the necessary know-how for living in the city, the particular useful things, the things that are worth more to know how to do, speak, shut-up if you want to get out of it. The particular things that you are interested in understanding, if you don’t want to die too alone, too poor and not totally depressed. The essential things to a life in society, to a life like those who teach it to you, all of which you should know in order to manage for the better the way you are screwed. Read — the verdict — Write — inside the boxes — Count — the number of years that remain for you to endure. The ways of being, of bearing as serenely as possible, your slavery. The modes of (non) thought adapted to this stupid joke: your rotten condition.

The schools, molds for hordes of neurotic citizens and devotees who, like those who came before, assure and defend with passion and conviction the survival and the perennialness of (those who have made that which is) this world. The school makes it very easy for the cops, advertisers and other cynical, deceitful bastards. The school fabricates cops, advertisers and other deceitful, cynical bastards. The values of the school are those of the hated society: work, competition, performance, pridefulness, ambition, submission, obedience, collaboration, snitching… (etc, etc) Carrot, stick, efficacious results.

What becomes instinctive is to understand nothing. The principle function of school is the total moral destruction of each individual passing through their hands.

In school, one works for nothing at all, all the time. In school one learns to work and what is more, for lack of anything else, to find there one’s reason to exist. When your goal in life becomes to pass to the next grade. Work hard and ask for more. Learn by heart, think by heart. Learn to learn.

Starting from early childhood, by methods violent and efficacious, the individual is broken, slowly but surely: wake up too early, too cold, too dark outside. Six, eight hours per day locked in, sitting, attentive, silent. In rows two by two or crowded in the hallways. Presence required. Bells at every hour. Schedule immutable, repetitive. Testing knowledge, general average, “could do better”, pop quiz, panic, lateness not tolerated, punishments, the prof’s vices, monitors, others. Praised model students, rewarded every day. Rebels, misfits, disinterested ones or others, stuck tight, day after day.

After the maternity ward, before the homes, factories, offices, police stations, armies, hospitals, cemetaries, retirement homes, prisons, psychiatric hospitals… school, it’s imprisonment. Insofar as the child is a student, a little citizen, she is not “free”. That obviously doesn’t exist, freedom, (not even in the head, we agree) but in any case, there, it’s the limitation of movement (among others) which is what matters. Every morning, once past the door, you are detained, for the day under the responsibility of the school administration.

Your parents are obligated by the state to put you in school. Child, you realize the existence of an authority superior to your parents that has taken over you and the others. If the authority of your parents is often crushing, the school’s seems insurmountable, impossible to challenge. You get stressed, you bawl. You feel again the fear because you have to give a report. Like a dog, you get to fear more than anything else the reaction of your masters. Stronger than the father, the ultimate bastard, the CEO, the boss: the principal, holder of absolute power, who doesn’t know you (right away) but who everyone knows, fears. You prefer to fall sprawling down the staircases five times in a row rather than have to spend three minutes in his office.

School teaches fear. To materialize it within oneself. Fear of not conforming, of disobeying. Fear of being punished, of deceiving the referents (profs and parents). Fear, once integrated, indelible, inscribed for always in the deepest part of each of us: Fear of the cop, of stealing, of disobeying, of exceeding the established limits. In the grip of fear. Fear and then accepting everything because you are disarmed, defused. To be scared and at the same time to approve of those who are at the source of it all and who say they have the antidote to it.

The school fabricates in each the illusion of democracy in teaching the people to vote, elect delegates supposed to defend them and represent them before the higher authorities. Supposedly the only way to be “heard”. The habitual masquerade, in order to better make you dociley integrated with your rotten condition: You know nothing, you are nothing, nothing more than an element, a cargo of kids of the same age. “And you have the luck of being nothing, you have the luck of going to school.” The arbitrary as a principle. The resistance an electronic sub-component.

School, world under regimentation, habituates the people to fleecing themselves, to being tested, watched, counted, classified, locked up, and to ask for more of the same. Despite yourself, you submit yourself to a multitude of formalities that make you bend, and that you come to find almost justified. These habits that have determined your way of thinking, of resigning yourself.

Recall your memories, the return to school in the fall, the first classes of the year. In each class, each bastard of a prof makes you fill in your blank form. Facts about yourself, your parents. Like everybody, you submit to this ritual. You betray, to unknown persons, information, shameful sometimes, personal in any case. You surrender yourself in order to begin in every case.

You find it normal to respond to the call at the start of each class, to be constantly watched, to not be supposed to move except to and fro through the hallways from each appointed place, and at each appointed time, to obligatorily carry the multi-subject notebook. You find yourself again making the connection between two poles of authority, the school administration and the family. You are constrained from informing your family of the dumb stuff that you were able to do the preceding day and the punishment you have earned. You are put in the situation of denouncing yourself.

It’s because there wasn’t anything else to fuckin’ do, because there is nothing fuckin’ interesting to do at school, in the choices you’re given there. One hour of recreation for 4 hours of class. The important thing about being constantly watched, it’s the attempt, as soon as it’s possible to defeat this surveillance, to act in a non-conforming way, on all occasions. And as for being enthusiastic there about rendering oneself dependent on it. Fuck shit up for your own safety and well-being.

Translated by Disco Inferno from the French language zine Vidange

This entry was posted in Arson, Wild Youth and tagged 'children's prison', arson, Fire to the School!, Fuck School, Fuck the Law, If The Kids Are United!, school arson, War on Kids. Bookmark the permalink.