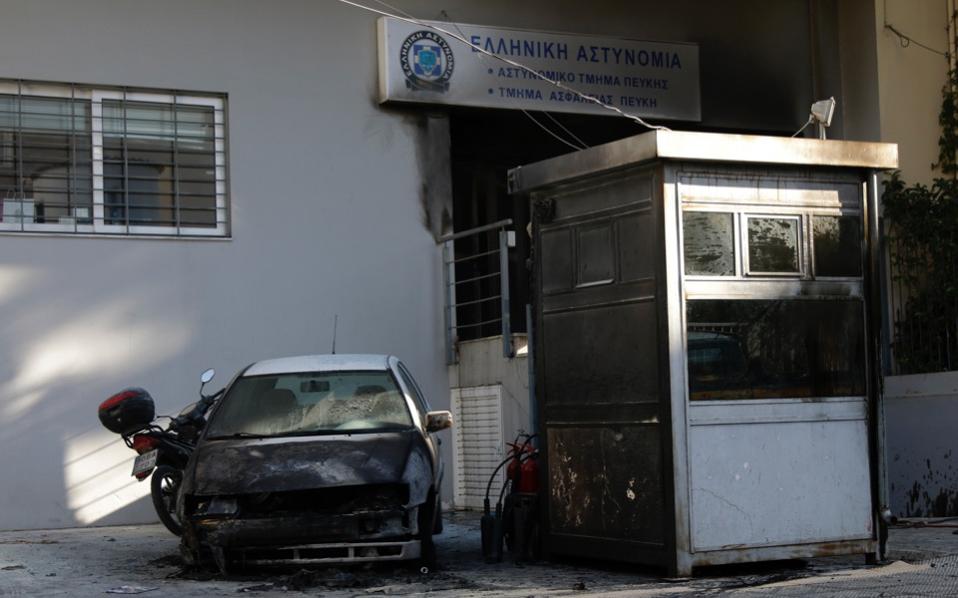 FOTH: We want to make it clear this is not a claim, just an article to inspire those who have had enough of this prison island that is the so called territory of the UK!

In Pefki area of Northern Athens, in the so called territory of ‘Greece’ ten hooded individuals showed what can be done with a few people, some cheap petrol and some empty beer bottles. Molotov cocktails were thrown at the local cop station in an attack that charred the front of the repressive building and torched two cop cars.

Hysteria and panic has been unleashed by the national media scum that the attacks by anarchists against cop stations has become a daily occurrence and oil has been added to molotovs to make the fire spread quicker.

The right-wing leader and anarchist hater, Mitsotakis, after visiting the cop station spilled out his usual propaganda diatribe even going as far as to belch out “There can be no freedom without security and personally I am determined to restore law and order to the country.” Mitsotakis is known for hating anarchists due to a relation of his being killed by an armed group in the past. He is regularly seen making propagandist statements against the area he calls ‘Exarcheistan’* (tinted with racism) promising to clean up the area and eliminate the ‘anarchist threat.’

Burn the cops and all politicians out of their holes!

*Exarcheia, an area in central Athens, next to the Polytechnic that has a long history of anarchist struggle. Weekly attacks occur upon riot cops in the area and is the main location of riots when they break out.

An attack on Exarcheia cop station in September 2015 after a protest to commemerate the killing of anti-fascist and hip-hop artist Pavlos Fyssas (Killah P) by fascist scum of the Golden Dawn in 2013.