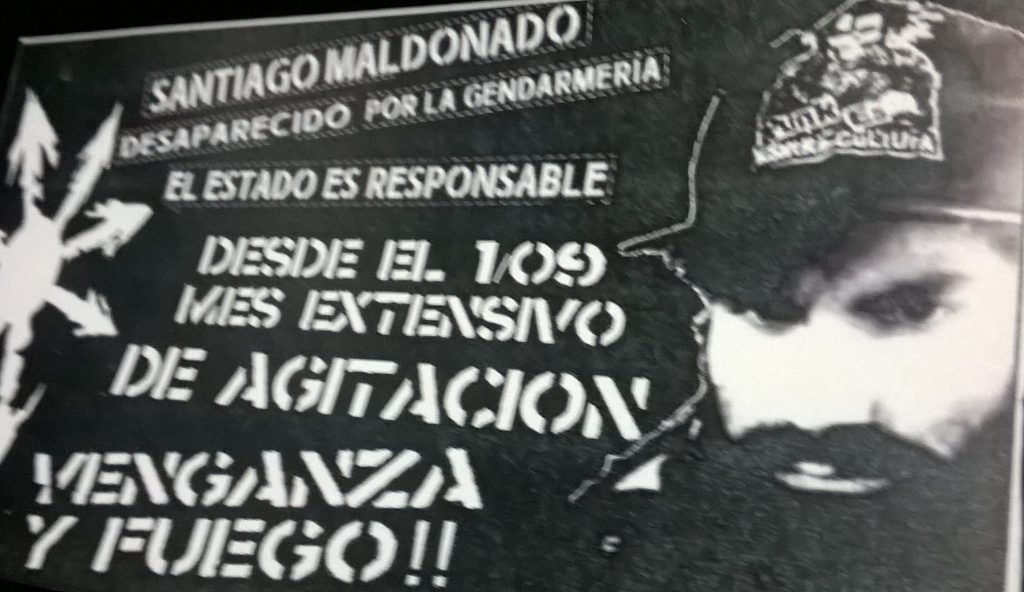 The murder of Santiago Maldonado has triggered a series of actions in Argentina. Santiago disappeared on August 1st, kidnapped by the gendarmerie, and on October 20th, it was confirmed that a dead body found in the Chubut river belonged to our compañero Santiago Maldonado. We hope that the guilty will suffer the worst possible vengeance.

Today like last night we continue in the streets – SANTIAGO PRESENTE!

Sad are the hours that we are living. On October 20th, Sergio Maldonado (brother of Santiago) confirmed what we were all so afraid of. The body planted by the gendarmerie in the Chubut river is the compañero Santiago Maldonado.

The gendarmerie are responsible. The State is responsible. Because it was them who took him from the rebel territory of Cushamen on the first of August.

Santiago Maldonado is no longer one of the disappeared, now he is one of the murdered. But we must never forget the most important thing. Santiago Maldonado was killed for fighting, for showing solidarity, for confronting the gendarmerie alongside the weichafes (warriors) of MAP, the Autonomous Mapuche Movement of Puel Mapu, to demand the freedom of Facundo Jones Huala. (Translation note: Facundo is the spokesperson for RAM – Mapuche Ancestral Resistance, and is currently being held prisoner by the Argentine State in Esquel, Chubut province on ‘terrorism’ charges).

Santiago Maldonado was killed by private property. Not content to disappear and murder him, they even tried to misrepresent him. And many who claim to honor his memory as well.

We must always keep him in our hearts as a fighter, as somebody who struggled alongside others to change this society of shit that prioritizes commodities over life.

The best way we can pay tribute to him is to continue fighting, to continue defying the State and Capital just like he did. Santiago Maldonado who fought on the barricades of Chiloé, defending the sea. (Translation note: Refers to the struggle on Chiloé Island, in southern Chile, in response to an environmental disaster in 2016 that caused mass die-offs of fish and other marine life). Santiago Maldonado who fought for the immense southern land.

Every time the strong Patagonian wind blows, he will be there.

Whenever the rebels of the world try to storm the heavens, he will be there.

Rest compañero, the sea, the land and the forests for which you gave your life are waiting to provide you shelter.

This entry was posted in Repression and tagged Argentina, Mapuche, Repression, Santiago Maldonado. Bookmark the permalink.