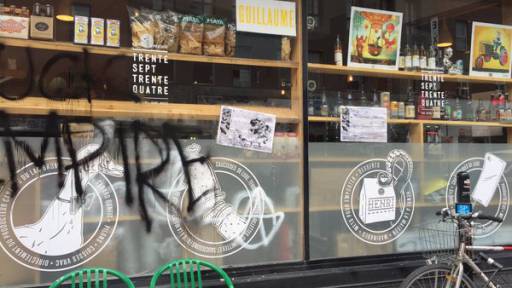 ‘Fuck Empire’ sprayed & the posters on the shop window

FOTH: Published to highlight the possibilities of anti-gentrification struggle in prison island, time for praxis!

Armed with spray cans, the masked raiders attacked Montreal’s bourgeois grocer 3734, setting off smoke bombs and making off with thousands of dollars worth of food. The group fled before police arrived, throwing objects at the store front and at nearby expensive cars.

A trail of posters, hastily slapped on the windows of the small, wood-panelled shop, made it clear this was not a random attack. “With the arrival of the condos in Saint-Henri, a multitude of expensive businesses followed, hipster restaurants and bourgeois grocery stores,” read a poster. “On May 28 we tried to recalibrate things a little bit, to the extent of our means.” The stolen food would be redistributed “joyously” in the neighbourhood, it added.

The crux of their actions was summed up at the end of their three-paragraph explanation, in large, bold lettering: “Long live de-gentrification.” Gentrification has been a heated conflict in Saint-Henri for years. Multiple shops on the same street as 3734 were targeted in a similar fashion a year ago.