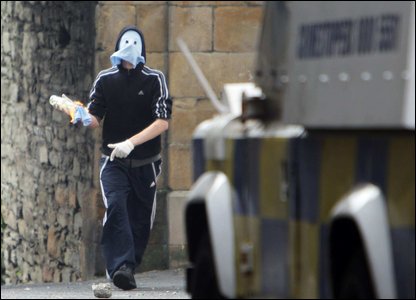 A pipe bomb has been thrown at a cop patrol in Derry. A number of homes were evacuated during the security alert at Leckey Road flyover close to a ‘controversial’ nationalist bonfire built in the middle of the main road.

The six metre-high blaze had partly blocked Leckey Road in the Bogside. Sinn Fein election posters and Union flags were burned. An attempt to move the fire from the middle of the road had failed, as cops attempt to attack and shutdown bonfires.

The parties of authority including Sinn Féin have blamed dissident republicans.

FOTH: The Bogside at one period between 1969-72 was part of a self-declared autonomous area, ‘Free Derry’. Violence in the area reached a peak on 12 August 1969, culminating in the Battle of the Bogside—a three-day pitched battle between residents and the murderous RUC. From this period onwards the British army was constantly positioned around the area. On 30 January 1972, thirteen unarmed men and boys were shot dead by the British Army’s Parachute Regiment at a march against internment (imprisonment without trial) in the Bogside, a massacre that is infamously known as ‘Bloody Sunday’. Since then the Bogside area is known as a relentless unruly area against British domination.