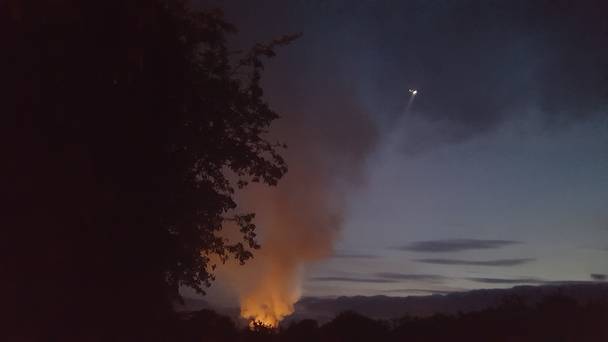 Fire To Oberstown!: The scene from afar last August

A group of youths understood to include those who were part of the riot that led to the fire and destruction of one part of the Irish prison in August were involved in a ‘barricade’ situation. The riot started yesterday afternoon after a young man was taken to hospital suffering from a suspected drugs overdose.

The authorities at the prison were unable to prevent serious damage being caused to one of the remaining wings of the prison which is supposed to hold up to 90 inmates but is thought to contain only between 30 and 40 now.

Since the €56m prison opened in January last year, there have been dozens of attacks on screws leading to high levels of sickness leave.

In the last attempted break-out in August eight youth prisoners broke out of their cells and onto the prison roof after a screw was overpowered and threatened with boiling water. The incident that led to the riot and fire was started while screws were protesting about attacks, injuries and fears for their lives at the gates of the facility in north county Dublin, Ireland. While the protest was in operation the youths were forced to remain in their cells being monitored by other screws. But the youths used the protest to their advantage when one requested refreshments, and a screw who brought them was confronted, threatened and overpowered at the door and had their keys taken. The youth was then able to free others who then took over the block. Youths then accessed the roof and started pulling the tiles off, and set fire to Blocks 1, 2 and 3. When emergency services were called it is reported that some of the youth on the roof threw roof tiles down at them to prevent them from putting out the fires. There were no reports of injuries to fire crews, but the blaze took hold and eleven units of Dublin Fire Brigade spent hours fighting the fire. Accommodation Block 3 collapsed due to the extent of the blaze, and Blocks 1 and 2 were left gutted. One screw was injured and treated in hospital when searching the facility for detainees who had escaped from the cells.