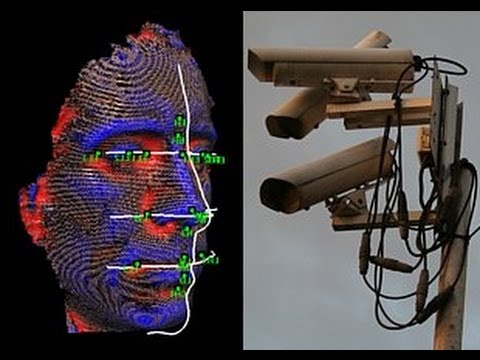 If couldn’t get any worse in belly of the beast that is London, with the racist tactics of the Met cops, gentrification of areas to push the excluded out of the city, tower blocks burning hundreds more to death for profit, racial profiling of anyone from certain areas of the city, constant so called war against members of ‘criminal gangs’, stop and search that only targets people of a certain background, which has led to the death of countless people at the hands of the Met murderers. Now they will scan festival goers faces at Notting Hill carnival, in a blatant attack upon the African-Carribean population of the city.

Notting Hill carnival is one of the biggest European street festivals and began in 1966, bringing people from many different backgrounds together celebrating Carribean culture. Back in 1956 the Notting Hill area was the scene of attacks upon African-Carribeans for several nights in August by  white teddy boys influenced by fascists such as Oswald Mosleys Union Movement and other white racist groups such as the White Defence League (seem familiar?) The carnival since has been seen as a reaction to the racial riots and its beginning has been constantly harassed by the authorities and cops because the organisers refused to co-operate with them. Due to the cops not wanting the festival to take place there has been heavy policing of the event, disorder and riots at different times since. Notably in 1976 there was a full scale riot after cops violently attacked a crowd of people they suspected of being pickpockets, the violence led to a full day of rioting as the cops tried to shut down the carnival. In 2008 the Carnival was hit by rioting right at the very end of the weekend, involving large numbers of youths and injuries to cops. Mainstream scum media outlets recorded footage of the violence, which was subsequently used in video evidence in court, a large amount of the approximately 500 youths who were arrested were prosecuted because of this evidence. In 2011 the Carnival was cancelled because the authorities feared it would turn to violence soon after the August riots that had spread across the country.

The use of the real-time biometric tracking technology at the Carnival is a blatant example of institutional racism that has always existed not only in London but across the island, despite the government trying to portray a multi-cultural society, it fuels the backlash against different cultures and migrants with their lackeys the mainstream media scum. Feds at the two-day west London event will use the facial recognition system and match faces in the crowd against databases of people they suspect will cause trouble, comparing them with images of people previously arrested or under bail conditions to keep away from the event. Last year’s carnival led to 45 cops being attacked and 454 arrests, the highest number in a decade, in a sign of rising tension at the event between the racist cops and event goers.

A different facial recognition system was used by cops in Cardiff when the Welsh capital hosted May’s Champions League final between Real Madrid and Juventus, wrongly identifying a man in the process proving how this technology can lead to an arrest that will mean they will be recorded and entered into the ever growing forensic database that includes DNA. Reports say that the systems used to scan peoples faces are more likely to misidentify African-Carribeans.

This repressive move by the Met cops is not surprising, more and more we see the use of surveillance technology software being spread to more public spaces and events, until you won’t be able to move without being seen by CCTV, which is now a standard on this island, but now you will be recorded in a database where ever you go, even wrongly identified for crimes you have not committed but generally to prevent anyone from thinking of committing any act of illegality or rebellion. 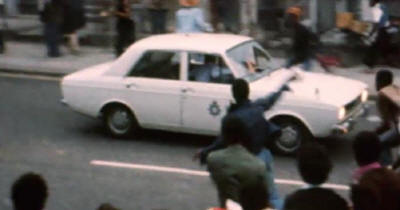 Rioters ‘mash up the wicked one’ in Notting Hill 1976

The use of the surveillance technology is nothing new for the African-Caribbean’s on prison island who have been racially profiled, violently abused, killed and constantly surveilled since the 1960’s, always deemed as ‘feral’ and ‘criminal underclass.’ What is clear is that the state and upper echelons of society fear the coming together of people of different backgrounds that Notting Hill Carnival represents, that it can easily be a form of rage and rebellion like it has in past, when authorities push those who don’t choose their nightmare of ‘total control.’

What is more horrifying is that society welcomes this technology with an embrace, how the same software is used in smart phone’s cameras and how such citizen organisers of events such as the Notting Hill Carnival co-operate with authorities to let such repressive technology be used on their fellow carnival goers, just to keep the order of making a profit (Notting Hill Carnival is estimated to make £93,000,000.)

There are no excuses for this repressive use of technology, be it ‘terrorism’ or ‘crime’, the real terror and crime is that of the state, capitalism and the technological-industrial society! What will we have in the end but one massive open prison on this island?! 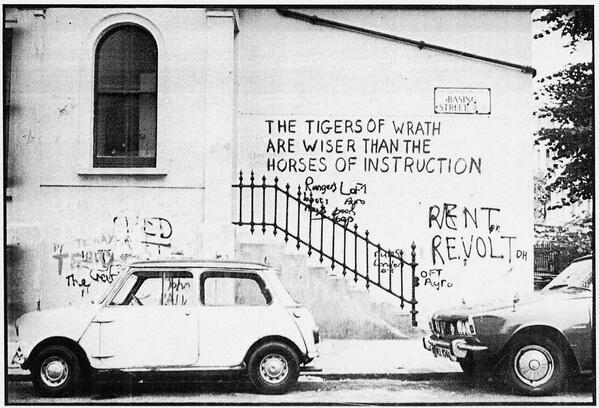