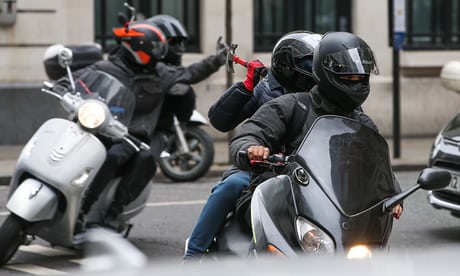 A flagship store of the mind controlling global capitalist scum Apple has been audaciously raided on one of the most expensive and central streets in the centre of London. The store on Regent street was set upon by a 10 strong masked gang on mopeds who used hammers to smash to pieces the front windows, making off with expensive products. Even a security scumbag failed to stop them as they threatened him with their hammers, with the so called hero backing off.

The attack on Apple comes one month after another moped gang attacked a high-end jeweller’s in the same street. In that attack they smashed display cabinets to escape with a high-value haul after a hammer, an axe and bats were used to break in to the store.

The cops have been trying to catch up with the gangs with new repressive tactics. A spray that marks with an invisible liquid that is extremely difficult to remove and contains a DNA-style unique code is one such method. Another is automatic “stinger” devices that can remotely puncture tyres. In a third tactic, a fleet of new lightweight motorbikes has been rolled out to make cops more nimble in their pursuit because raiders often use alleyways and narrow streets to escape. From the looks of it none of this repression seems to have stopped those who have had enough of staring at the wealth on the high streets in the belly of the beast.

FOTH: Smash and grab raids using mopeds as quick getaway vehicles have become a regular occurrence on prison island along with ATM raids either using an explosion or heavy vehicle to break into them. Despite the control the state claims to have in this grey society that attempts to divide people between the ‘included’ and ‘excluded’ their picture perfect image of wealth being inaccessible is shattered everyday.