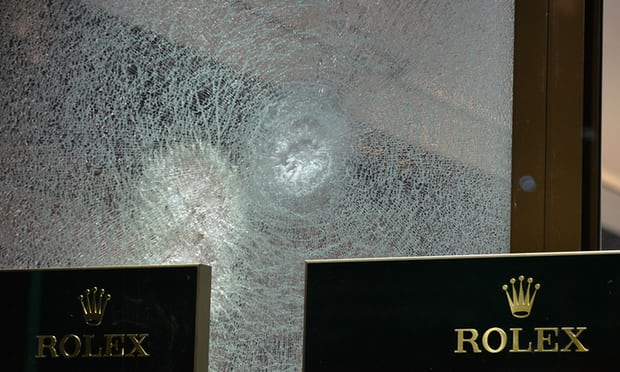 A smash and grab gang on mopeds have liberated a massive haul of jewellery from a fat cat jewelers in the posh West End in the centre of London yesterday. The gang drove up to the building on three mopeds armed with machetes and a hammer, then attacked the cabinets of Mappin & Webb on the high value Regent Street. A private security guard tried to detain the raiders but failed miserably. One scooter was abandoned next to the store, while another was crashed in Oxford Street, with all six raiders cheekily getting away on the last scooter.

FOTH: On prison island it has become common for attacks to be made on high value jewelers stores, a method that is easily reproducible, also hard to stop because mopeds can easily escape the cops even going off road and the attacks happen in the space of minutes.  The Met cops have even created a specialized unit called the ‘Flying Squad’ to deal with the upsurge in raids even regularly targeting youth moped gangs on housing estates in London that they blame for the raids. In addition to the official state repression, the capitalists in the West End also use security units employed by notorious security scum firm ‘UK Protection.’ The units are made up of ex-special forces, army and cop thugs from around the world. It seems despite the cops and security scum attempts to repress such illegalist activity that it has not really had an affect when the loot of the rich is so easily at hand.