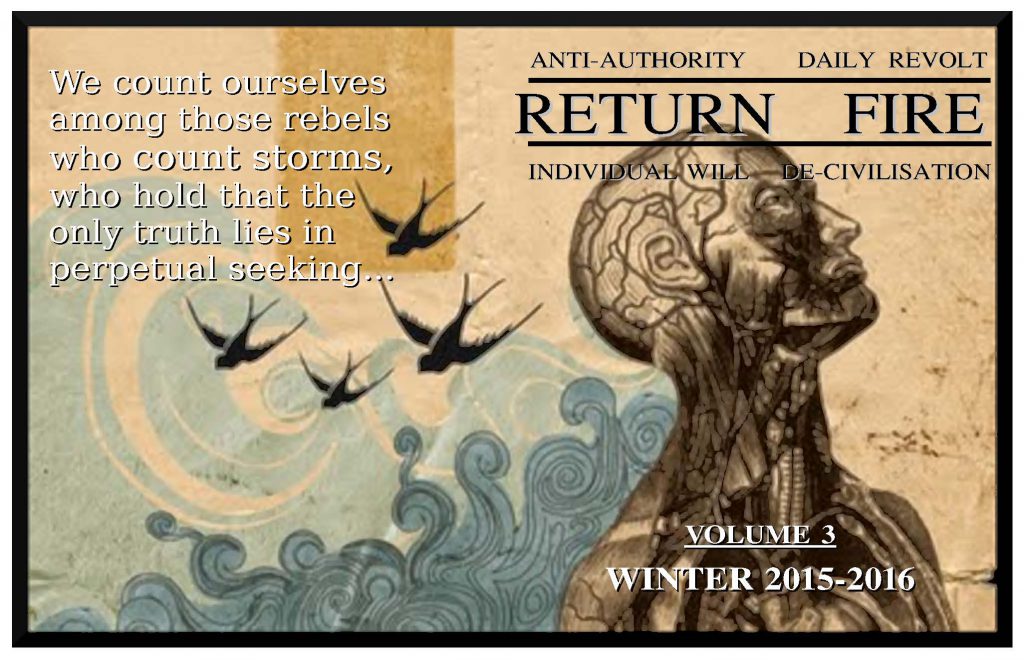 From Act for free

Just now we’ve sent out the PDF versions of our recent releases, for downloading and printing. (For past issues, see 325.nostate.net/?tag=return-fire). To summarise, there’s the full length edition of Return Fire vol.3 (Winter 2015-2016), full of news, theory, poetry and antagonism; a companion piece consisting of our ‘glossary’ entry for the issue, on Colonisation; an imposed and print-ready version of ‘Smarter Prison?’ as a supplement to vol.3, which we received from ‘Radical Interference’ and released for December of 2015; and lastly, we’ve uploaded one of the feature texts from vol.3, ‘The Veil Drops’, to theanarchistlibrary.org as a separate file for reading and reproduction.

A continuation of our project to bring incisive anarchic content from around to world to an anglophone readership. New editorial content, reprints of things we’ve found useful, artwork, action listings, foraging information, the usual.

There’s a few previously-untranslated articles in this issue. For example, one is an extract from the latest cover story of Italy’s eco-insurrectionary periodical Terra Selvaggia, on ‘The Advance of Urbanisation’ and, simultaneously, cracks opening in the concrete which we could utilise… Annie Archet meanwhile tells a life-story of evading identity, in Portrait of the Invisible Woman in Front of Her Mirror. To name some out of the texts we’ve assembled from selections of pre-existing ones, David King looks at the reductionist and patriarchal implications of modern reproductive technologies in “Into Her Inner Chambers”, and Nicola Gai speaks to acting within ‘The Maximum That Our Abilities Allow’ (from his contribution to the founding issue of the Croce Nera Anarchica).

The content we have harvested whole includes The Intensification of Independence in Wallmapu, John Severino’s poignant reflections on a project within an indigenous Mapuche community; The “Wild” as Will and Representation, about commodified and alienated approaches in the urgent need for land reconnection, simply signed M.; and Sean Dunohoe’s harrowing (if limited) polemic against the Close Supervision Centres within the British prison system. (We note that this year the organising collective for the June 11 project of solidarity with long-term anarchist prisoners has called for a focus on such units wherever they are in the world; hence we’d like to dedicate this version in that direction.)

As for our usual columns… We take a retrospective look at some Global Flash-Points of insurgent activity in the months following our last volume. Rebels Behinds Bars covers the State’s aggressions against our comrades, and the latter’s thoughts on topics from surviving incarceration or repression to (anti-)organisation for the attack on authority. ‘To Create & Maintain Their Wealth’ and ‘Sensuality, Magic & Anarchist Violence’ address gendered and speciesist domination through reviews of Silvia Federici, Arthur Evans and Jason Hribal.

The Poems for Love, Loss & War are from Rydra Cosmo, Henry Zegarrundo, Natasha Alvarez and other appreciators of all things feral. For our Memory as a Weapon segment, we’ve used Unsettling America’s spellbinding telling of civilisation’s spread through Europe from the south and beyond, and subsequent trajectory, in The Witch’s Child.

And of course, much more! (All prisoner addresses and also some court-case news is now up to date in the PDF version.)

This time, we ended up printing the ‘glossary’ separately to the main body of the zine. This sizeable essay could be a stand-alone on the subject (one which we feel to be both key and misunderstood by anarchists in much of the world) and distributed as such, but is also relevant to several items in contents of vol.3.

Newly laid out in A5 imposed format, this exploration of the ‘Internet of Things’ and the technological ideology which it advances was first submitted to us during the Black December mobilisation. (We’re happy that since then, Silvia, Billy and Costas, who are referenced in ‘Smarter Prison?’, have been told they will not face trial again for their thwarted attack on the IBM facility.) The struggle against the nano-world continues…

This is a reader on counter-insurgency through the lens of ‘crisis’, the social and de-civilising. It’s the longest editorial piece from vol.3, and up on The Anarchist Library for wider accessibility.