‘Neither Prison, No Policemen’ – Enzo Martucci 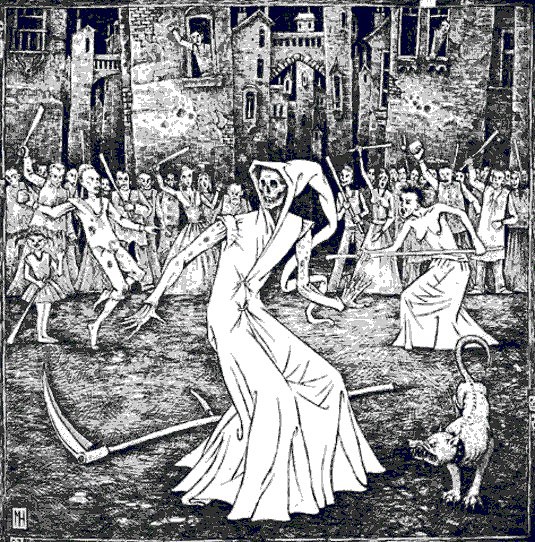 The libertarian communist of today conceives the Anarchy as a democratic a-statal regime, based on the municipality in which the majority will decide the general rule of conduct… The theorists of libertarian socialism, Bakunin, Kropotkin, Rèclus, Malatesta were instead more tolerant. They thought that in the future municipality, the economical system to follow, the ethical and moral rules to respect, the collective decisions to take will not be imposed by the majority, but they must be voluntary accepted by the totality of the associated. They believed in the agreement of all, in an idyllic life, but they admitted also a dissident minority to whom the majority will recognize the right to try their experiences. Only if the minority will attempt with violence the interests of the majority, this last one will be obliged, with force, to subdue it.

“Martucci will not accept” wrote Malatesta in 1922, polemizing in Umanità Nuova, “that, for regard to the sacred rights of the individual, we’d have to set free, to do harm, a wild killer or a rapist of children. We instead consider him a sick person and we will close him into a hospital where we will heal him.” I think that as for nature, the individual can do everything if he has the force, so the others, that feel themselves injured by his action, they can defend themselves in every way. The defence is also natural and a group can expel the one who harms the comrades, can send him to another place or kill him if the damage has been too heavy.

But he must not be deprived of freedom, closing him in a prison-hospital, he has not to be healed if he doesn‘t want to be. The presumption to attend, to heal, to put the right way up, is extremely hateful because it forces the individual to cease to be what he is and what he wants to remain to be, to become what he is not and he does not want to be.

Take a type such as the sadist Clara of Mirabeau; tell her she has to cure herself to destroy her perverse and abnormal tendencies, that are dangerous for her and for the other people. Clara will answer you she does not want to heal, she wants to remain as she is, challenging every danger, because the fulfillment of her erotic desires, excited by the smell of the blood and the shows of cruelty, it gives her so deep pleasure, so strong emotion, she could not prove any more if she transformed herself into a normal woman and she was forced to satisfy with the usual and insipid luxury. Tell her she is a monster, she would be horrified, and she will answer you: “The monsters… The monsters! For first there are no monsters! What you call monsters are higher forms, or simply out of you conception. Are Gods not monsters? Is the genius man not a monster ? As the tiger, the spider, as all the individuals that live above all the social lies, in the shining and divine immorality of things. But also me, then, I‘m a monster!”

A famous killer who killed women not to rob them, but to violate them, to obtain the concordance of his spasm of pleasure with the spasm of death of the other, he confessed: “In those moments I seem to be God and to create the world.” If you had offered him the remedy to make him normal, he would refuse it, perceiving that in normality he could not find a so intense sensation as the one he felt in that abnormality. Therefore wanting to cure these individuals, wanting to heal them against their will, would be like to exact from a tuberculous to abstain himself from the smoke and the alcohol to prolong his life. “But I don‘t care if I die before”, will answer the ill man “but I want to satisfy myself now as I want. It will be better to live only a year more and not ten year suffering and renouncing to everything.”

Do you want to force, to be saved the ones who want to be lost? But they will not be the owner of their lives. They could not dispose as they like of it, and they perceive as a bad thing the benefit you would do to them. If the Clara of Mirabeau or the characters of Sade try to torture you, shoot on them. But leave them in peace and abandon the idea to induce them to the repentance, in the name of God and of morality, or to cure and heal them, for the glory of science and of the humanity.
And, besides, is it true that all that commit a crime are foolish, sick worthy of the mental hospital or of the shower?
If the answer is directed to Lombroso‘s science, it will answer positively. It will define the crime as an atavistic return. If its directed to Ferri‘s science it says that the crime is a product of the anthropological factor combined with the social one. If you‘ll ask Nourdau, he will say that also the genius is degenerated. This science is dogmatic and a unilateral move towards easy generalizations, extends the results of the observations on the facts, experimented and understood, to facts not experimented, not understood, and it will find an absolute truth, a pretentious knowledge, but fictive, that reduce to an non-existent unity the plurality of reality, and it assures that every one that is different from this typology is a pathological subject appointed for the hospital.
But such kind of science has nothing in common with the other relative science, modest, in a continuous doing, always doubting of its achievements and always reexamining them, destroying the certainties and going on a new street.
“There are two parts in the science” wrote Berth “one is formal, abstract, systematic, dogmatic, a sort of metaphysical cosmology very far from the reality, but it wants this different and complex. Real in the unity of its abstract and simple formulas; It is the science with a big S, the science who claims to deny religion, opposing solution to solution, and giving to the world and its origins a rational explanation. And there are different sciences, concrete, having everyone its own method, right to their own particular object, Sciences holding the real from the nearest and are no more that reasoned technical. Here the pretense unity of the science is broken”.

The socialist, communist, the builder of future cities, not being able to accept the truth, unique and universal, reveled by the religion they denied, receive from the Science, unitary and dogmatic, the other truth, unique and universal, outside of which can‘t exist individual welfare, neither social order. They feel the need to have their foot on the solid ground of the absolute certainty, and for this reason Malatesta collects all the scientific response on the origin of criminality. But it is not true that only people that have markedly abnormal tendencies, that are mad or ill, make crimes. The experiences show also perfectly healthy and normal men commit crimes and not only for economical reasons or for causes determined by ignorance or prejudice.

A young man, good, simple, sincere, that I knew in prison, he was there because he was serving a life sentence, having poisoned his wife to live with his lover. An accountant was with me in confinement on Tremiti‘s Island, he was a man more normal, common, ordinary never known.
To the confinement he was sent by fascist police because he had hosted a fiery communist brother. But the accountant seems to be the personification of the pacific and calculator wisdom of the middle class. Also nearly he did not go to prison because he corrupted babies and made acts of lust on them. Money, with which he bought the silence of an angry mother, saved him on that occasion. But he confessed he always made the satyr when he was free, in Milano.

A friend of mine, died many years ago, was a generous, loyal, noble young man, with an exquisite sensibility and an upper cleverness. He was a refined poet, he fell in love with a woman that in the end left him. Meeting her one day, in his soul upset by anger and jealousy it manifested imperious, blind, instinctive, the need to put fire to the baby she had in her arms. “I felt” he told me “I had to kill the baby to make the mother suffer all that she had made me suffer. I contained myself with superhuman effort of will. But a moment more and I would have shot”.

All men can commit crimes, because in the soul of everyone are gathered the more different instincts and the more opposite tendencies. In me are mostly developed the generous one, in you the perverse one; but in special circumstance, under the stimulus of powerful material, sentimental or intellectual interests, I can kill a man and you can save another.
So what does the Malatesta society say? Does it consider me a fool only because I do my will and my reason did not have the force to hold the instinctual act? But not always will and reason are able to stop the instincts! Sometimes they can, sometime they don‘t. And then, in certain cases, also if I can stop myself, I don‘t do it because I think is good for to follow the spontaneity that led me to the criminal action. To kill, for example, who offended and damaged me. So am I a fool because I think in my way and not like the others that condemn the revenge?

But Malatesta’s society wants the mad at every cost, and closes me in the prison-hospital that is worse than the bourgeois prison. In fact, in prison I stay for a determinate period, the time of punishment. The law based on classical school considers me responsible for my action, and after punishing me with a punishment proportionate to the caused damage, lets me free and it doesn‘t care about what I will do. Instead the law founded on the positive school judges me irresponsible, ill and it establishes I will remain in the hospital till I will be sane. That is for indeterminate time, till the day the doctor will decide to let me go. So I‘ll become surely mad, having frozen showers, straitjacket and other benevolent healing treatments.
The repression of the crime through the internment of criminals in the mental hospital, would ask also the constitution of a police to raid the dangerous sick people. But in this way will rebirth the authoritarian mechanism- juridical- police and there would not be freedom. In the Anarchy could not exist prisons disguised as hospitals, neither policemen masked as nurses. The Individual will provide to his defense by his own, or in association with others, but not delegating this task to specialists that should become masters of all.
The natural spontaneity, no more oppressed by the compression of the laws, morals, education, will not conduct us to the impossible paradise of love brotherhood, but it will not even produce a resurgence of murders and violence.
If, instead, to keep the order and annihilate criminals, we‘ll create a new repressive and preventive system, we‘ll fatally come back to the society we destroyed. That is the society of the governors and of the governed.

From Verein Von Egoisten Ed. zine ‘And I Laugh… by Enzo Martucci’