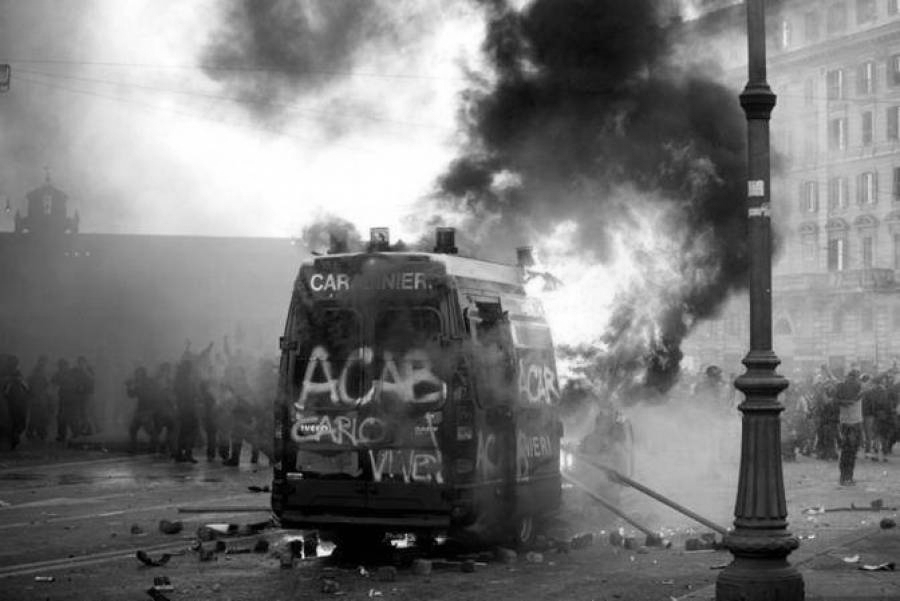 From: 325 & Escalation #1 – Texts about the Informal Anarchist Federation and the Insurrectional Project (ACN)

OPEN LETTER TO THE ANARCHIST AND ANTI-AUTHORITARIAN MOVEMENT

Released by the FAI (Informal) in 2003 after a series of letter-bomb attacks against State targets across the EU.

As the consolidation of the EU is going on quickly and assuming all the wickedness of the political, economic, military-repressive choices of the various States, and as a European constitution that re-establishes and legitimates EU dominion is about to be ratified, the first Informal Anarchist Federation struggle campaign has started. We could not deny ourselves the pleasure of actively criticising the six-month’s Italian presidency of the EU, which is coming to an end. We are aware that, behind any official rhetoric, the decisions that have been taken during the last months will bring about new practises of exploitation and dominion. In Fortress Europe, where not only the borders between exploiters and exploited are defended with the arms, we oppose trade agreements and the militarization of the territory with free agreements between those who struggle against dominion, as we want to demonstrate that not only is the struggle possible, but it is also an absolute necessity.

Today we have attacked the repressive apparatus that plays the democratic farce and that will bring the main characters and institutions to the new European order:

-The various police departments, which will soon be backed by a European army, besides their traditional task of internal repression, have the basic mission of filtering the huge masses of poor people who want to step into Fortress Europe. In fact, only the workforce needed by the bosses is allowed to get in, the others are sent back to be exploited in their countries of origin.

-A prison system, which is more and more crowded and widespread, is consolidating its main role into repression. It is the last bastion in defence of the system, whereas starving salaries and the last remnants of the welfare are not sufficient to stem the anger of the exploited.

-Bureaucrats and politicians are always ready to plan and promote any adjustment that serves to keep the system alive. The actions carried out today, as well as the ones that will follow, are planned so as to avoid the possibility of striking innocent people. We will carry on demonstrating our profound hatred for the State and capital and our unbounded love for a world free from the dominion of men over men and of men over nature. We are not the only ones, nor are we the last. In every street, in the day and in the night, we see that the same destructive-constructive tension for a better world is growing. We were in Genoa, we were in Saloniki, we were on the Italian roads last night, and tomorrow we will be on new roads to fight the misery of the existent.

Attack and destroy the responsible for repression and exploitation!

Revolt is contagious and can be reproduced!

Social war against capital and the State!

WHO WE ARE
We have created the Informal Anarchist Federation, that is to say a federation formed either by groups of action or by single individuals, in order to go beyond the limits implied in single projects and to experiment the real potentialities of informal organisation. We strongly believe that only a chaotic and horizontal organisation, without bosses, authorities or central committees taking decision, can fulfil our need for freedom here and now. Our goal is to have an organisation reflecting the view of the anarchist society, which we struggle for. This is intended as an instrument and not as the copy of some old armed party or as an organisation looking for adepts. If it were not an instrument to be used for testing the efficiency of informal organisation and its capacity of strengthening quality and continuity of the revolutionary action, it would be absolutely useless and would certainly die out. Through widespread actions it is possible to conciliate organisation and theoretical/practical debate on the one hand, and the anonymity of groups/individuals on the other. Actions, in fact, besides bringing their specific message of destruction/construction, also propose other kinds of message, such as the ones implied in their methods and instruments. In this case the damage caused does not matter. We are aware that it will not be a well-armed minority group that will stir up revolution, and we are determined not to postpone our insurrection waiting for everybody to be ready: we are more and more convinced that a simple direct action against institutions is more effective than thousands of words.

FEDERATION because of its widespread horizontal structure, that is to say federation of groups or individuals, free and equal men and women bond together by common practises of attack against dominion and aware that mutual support and revolutionary solidarity are instruments of freedom. Relationships inside the federation are stable and flexible at the same time; they evolve continuously thanks to the ideas and practices brought in by new individuals and groups that will join. We do not want any democratic federation, as this would involve representatives, delegates, official meetings, committees, and organs implying the election of leaders, charismatic figures and the imposition of specialists of speech. In the informal federation, communication must be based on a horizontal and anonymous debate, which will come out of the practise (claims of actions) and of the widespread of theories through the means of communication of the movement. In other words, the meeting will be substituted by an anonymous and horizontal debate between groups or individuals who communicate through practise. The federation is our strength, that is to say the strength of groups or individuals that help one another through a well-defined pact of mutual support.

ANARCHIST because we want the destruction of capital and the State. We want a world where only freedom and self-organisation ‘dominate’, and a society where exploitation of men over men and of men over nature does not exist. We strongly oppose any Marxist cancer, which is nothing more than a fascinating and dangerous siren that claims freedom for the oppressed but actually denies the possibility of a free society and just substitutes one dominion with another.

INFORMAL because we do not believe in vangards nor do we think that we are an enlightened active minority. We just want to live as anarchists here and now and this is why we consider the informal organisation as the only kind of organisation capable of preventing the creation of any authoritarian and bureaucratic mechanism. It allows us to keep our independence as individuals and/or groups and to resist power with continuity. The Informal Anarchist Organisation practises the armed struggle but it refuses classic monolithic organisations implying a base, regular and irregular members, columns, executive cadres, huge amounts of money and living on hiding. We think that this kind of structures is an easy target for power. In fact, an infiltrated cop or an informer is sufficient to have the whole organisation or a good part of it collapsed like a house of cards. On the contrary, as the informal organisation is formed by 1000 individuals or groups that do not know one another (as they recognize one another through the actions they carry out and the mutual support bonding them), if by some unfortunate chance infiltrators or informers should come out, this would affect a single group without spreading to the others. Furthermore, whoever takes part into the Informal organisation is a militant only when preparing and carrying out an action. The organisation, therefore, does not affect the entire life and projects of the comrades so that all kinds of armed-struggle sectarianism are avoided. Once we are well rooted, power will find it very difficult to destroy us.

1. REVOLUTIONARY SOLIDARITY
Each group of action in the Anarchist Informal Organisation is engaged in showing revolutionary solidarity to comrades who are arrested or are on hiding. This solidarity will show itself mainly through armed action and the attack against men and structures responsible for the imprisonment of comrades. Solidarity will always be practised as an indispensable feature of anarchist way of life and action. Of course we do not refer to legal and technical support: bourgeois society offers a sufficient number of lawyers, social workers and priests, which means that revolutionists can be engaged in another kind of activities.

3. COMMUNICATION BETWEEN GROUPS OR INDIVIDUALS
The groups of action in the Anarchist Informal Organisation are not required to know one another. This will avoid repression to strike them and possible leaders or bureaucrat from emerging. Communication between groups or individuals is carried out through the actions and through the channels of the movement without them to know one another directly.